The Ingredient Italians Hated For Centuries

This humble ingredient took more than 300 years to be accepted by the Italians as they just hated it! It has now conquered the world to become a staple ingredient for countless dishes and today it is one of the most economic, versatile, and comforting ingredients used in every cuisine. Any idea what it could be?

We are talking about potatoes! They might not be the first thing to spring to mind when thinking about Italian food, but potatoes are used in a huge number of regional dishes up and down Italy’s boot so, of course, we had to do a little research into these tasty tubers.

What Are They Used For?

Aside from being served mashed, fried, boiled, or roasted as a side dish, in Italy potatoes are also shown the limelight when made into tasty potato gnocchi, crispy potato croquettes, or mixed with ham and mozzarella for the rustic Napolitan gattò di patate. There are also a host of soups, stews, and pasta dishes that utilize potatoes.

However, the Italians were slow to catch onto the potential of the potato. Originating in South America, potatoes were first brought to Europe from Peru in the 16th century. Their lumpy, gnarly, dirty appearance put people off with some saying they reminded them of leprosy. However, the population boom of the 1800s together with disaster and famine meant that potatoes slowly began to be cultivated and consumed across Italy and they eventually became a staple of the Italian cucina povera (poor cuisine).

Potatoes are a starch-filled root vegetable of the plant solanum tuberosum. There are currently 5000 varieties across the world including red, white, russet, yellow, blue, and purple which each have their own flavor, purpose, and characteristics. Generally, potatoes fall into one of two categories depending on the ratio of solids (starch, sugar, fiber, salt) to liquid they contain. Floury, starchy potatoes contain less water and tend to puff up when cooking, while waxy potatoes contain more and are better at holding their shape. Nowadays you may find some potatoes classed as ‘all-purpose’ but where possible it is always preferable to use the correct variety for the dish you are preparing for the optimum results.

One of our favorite ways to use potatoes is to make potato gnocchi. Use floury potatoes to ensure a light, fluffy texture, and be sure to boil the potatoes whole with the skins on to minimize the amount of water that will cause the gnocchi to be tough and chewy. Try to cook similar-sized potatoes so that they are all cooked evenly. Then use an Italian-style potato masher (which will also handily remove the skins for you!) before mixing the mashed potato with egg, flour and a sprinkle of nutmeg and shaping into small pillows.

One very important thing to remember is that you should never attempt to mash potatoes in a food processor. The heat and intensity will react with the starch of the potatoes and create a sticky, glue-like consistency.

Get more gnocchi knowledge with our brand new Gnocchi Cooking Course, an online resource of recipes, techniques, and explanations of how to make every kind of gnocchi imaginable from the classic potato version to variations made with vegetables, bread, meat, fish and even liquid gnocchi. Sign up for this along with our other web-based courses in our online cooking school Italian Home Cooking (made simple!). 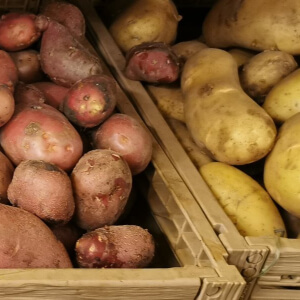