All About Pasta alla Carbonara

You would be hard-pressed to find a Roman who does not love pasta alla carbonara and this is why you should know all about it. As one of the four iconic pasta dishes of Rome (along with gricia, amatriciana, and cacio e pepe) it is a culinary symbol of the Eternal City and while there are countless imitations around the world, nothing beats the taste of a true Roman carbonara.

Watch as the Local Aromas Foodie Sisters dissect the essence of this classic recipe and look into the history and origins of the dish in their latest video episode and read on for more facts about the legendary Roman carbonara.

The story of the carbonara is a hazy one with plenty of conflicting theories about where the dish comes from, including one which suggests that it may not have originated in Italy at all. One thing that we can be sure about is that it is a relatively new recipe, not making an appearance in any cookbooks until the 1950s. The name carbonara links it to the idea of coal or mining, but whether this is because it was first prepared over an open fire, because was first created by the coal mining community, or because the cracked black pepper used in the recipe made it look like it was sprinkled with coal dust, we may never know.

Whether or not the inspiration for carbonara came from Italy or abroad, its ingredients place it firmly on the map of Lazio with the use of local pecorino romano cheese which is combined with beaten egg and a kick of freshly ground black pepper to create a rich, yellow sauce studded with crunchy chunks of that Roman staple, guanciale (cured pork jowl). Like its three Roman pasta counterparts, here the ingredients themselves are simple, yet care should be taken to achieve the carbonara’s signature silky sauce and avoid the dreaded sight of scrambled egg. While using cream to make a carbonara sauce might be common in other countries, in Italy it would be considered outrageous so, if you want to impress a Roman, make sure that you take the time to practice your technique. Traditionally carbonara will be served with a long, thin, pasta shape, usually spaghetti, but in Rome don’t be surprised to also find it made with rigatoni which works well in carrying the thick, luscious sauce and pieces of guanciale.

Join our 4 Roman Pastas Tasting Tour in Rome for a full understanding of the four quintessential Roman pasta dishes. Taste the main ingredients, have all 4 pastas with wine at a sit-down dinner, and end with gelato. 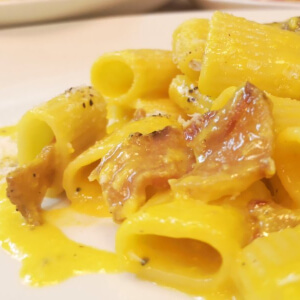