In Rome, nothing says springtime quite like artichokes so try this recipe for the traditional Roman-style carciofi alla romana. Beautiful globe artichokes are stuffed with garlic and wild mint then slowly braised until soft, tender and aromatic.

Spring is peak artichoke season in Rome when you can find these plump, purple-green spheres stacked up at markets all over the city and the word carciofi will appear on every menu in town. One of the most common recipes for artichokes is ‘alla romana‘ (Roman-style), which are easy to prepare in the home and can be eaten hot or cold, as either an appetizer or side dish, or even squashed into a panino with some shavings of pecorino or parmesan cheese.

The hardest part of the preparation is trimming the artichokes but we are lucky as our Mamma Giuliana is an expert so you can also follow her simple instructions for preparing artichokes here. Traditionally, the Romans stuff their artichokes with a mixture of garlic and a local wild mint called mentuccia (known as ‘lesser calamint’ in English) which has a different flavor and aroma to regular mint. If you can’t get hold of mentuccia you could nevertheless use a little normal mint mixed with some fresh oregano for a similar result.

Half a glass of extra virgin olive oil

Fill a large bowl with cold water, cut 2 lemons in half and squeeze the juice into the water, add the lemon halves to the water too. This will stop the artichokes from oxidizing and turning black.

Wearing gloves (to avoid staining your hands) rip off the hard outer leaves of the artichokes until you reach the soft, yellow, inner leaves. Cut off all but 4-5cm of the stalk and keep to one side. Continue trimming the artichoke by paring down the rough outer layer of the stem then cut off the tops of the leaves straight across. The artichoke should now look similar to a rose. Rub the artichoke all over with one of the lemon halves then put into the bowl of water and lemon juice while you continue prepping the other artichokes. Take the extra stalks that you cut off and also trim these and add to the water.

Once all of your artichokes have been trimmed, finely chop a couple of cloves of garlic (you can decide how much garlic you prefer depending on your taste) and a small bunch of mint leaves. Season the mixture then sprinkle a little more salt and pepper over your chopping board or work surface.

Now take the first artichoke and slam in firmly on the table to open up the leaves, pry them open with your fingers and stuff the garlic and herb mixture inside. Roll the exterior of the artichoke in the salt and pepper to season then place stalk end up in a large saucepan.

Once all of your artichokes and stalks are in the pan, pour in half a glass of extra virgin olive oil and two glasses of water (you could also add a splash of white wine). Cover with a lid or aluminum foil and cook on a low heat for about half an hour. You can check that the artichokes are ready by poking a fork or knife into the center at the base of the stem. When the artichoke is soft they are ready to eat. 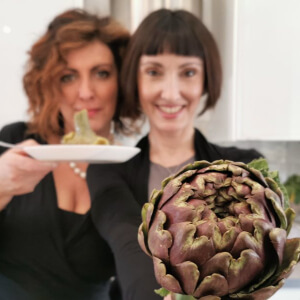