What is Roman White Pizza?

If you have visited any of Rome’s bakeries or pizza slice shops, you have probably seen Roman white pizza, locally called pizza bianca. These large slabs of golden flatbread drizzled with olive oil are a Roman staple which is consumed throughout the day, from morning to night. But what exactly is pizza bianca? And, more importantly, how should you eat it like a Roman?

Watch Foodie Sisters, Benedetta and Valeria, tell you all about Roman pizza bianca.

What is Roman White Pizza?

Pizza bianca literally translates as ‘white pizza’ but in actual fact, it is closer to a bread product than what many people consider to be pizza. A simple dough made of flour, yeast, salt, water, and olive oil, it is left to rise for many hours or days to encourage a light airiness. Once proved, the dough is stretched and fingertips are used to create an undulating surface to catch the olive oil that is brushed on top before baking. As soon as it comes out of the oven it is brushed with a new coat of oil and topped with a light sprinkle of salt and maybe a little rosemary. It is simple, comforting and delicious, especially when consumed freshly baked and warm from the oven.

It is said that the origin of pizza bianca comes from Rome’s bakers who, before baking their loaves of bread, would place a small piece of dough into the oven to test the temperature. Nowadays it is a truly Roman recipe, not to be confused with focaccia which is usually found in the north of Italy and generally has a spongier, breadier texture.

How should you eat it?

In Rome, we eat pizza bianca whenever and wherever. By itself, it makes a cheap, satisfying snack and will often be given to young children mid-morning or after-school as a treat. It can also be served like regular bread and eaten along with antipasti or cured meats and cheeses or brought as an aperitivo snack along with your pre-dinner glass of wine.

Often you will find pizza bianca split horizontally and filled with delicious ingredients to form a type of sandwich. A panino of warm pizza bianca stuffed with melting mortadella (a baked pork salami with pistachios from Bologna) is a Roman institution known in local dialect as ‘pizza e mortazza’ or alternatively why not try it with local porchetta for a savoury match made in heaven.

Fresh seasonal ingredients will also be used to fill pizza bianca. In winter, greens such as chard, chicory or broccoli rabe will be added with slice of milky mozzarella, while in summer don’t pass up on the choice to try pizza bianca stuffed with salty prosciutto and sweet, juicy, figs.

If you still cannot get enough of this amazingly versatile bread, don’t worry you can have it for dessert too. Many of Rome’s pizza-by-the-slice joints will fill their sheets of pizza bianca with Nutella for a sweet, chocolate version with a hint of saltines.

Try our favorite pizza bianca on our Pizza and Gelato Tasting Tour and on our Roman Street Food Tour in Rome. If you want to make your very own homemade pizza, join our rooftop pizza-making class in Rome. 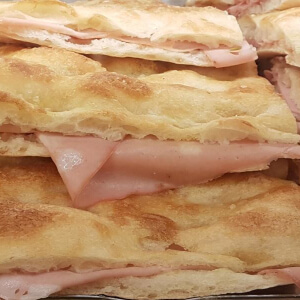