There is no reason to buy bottled water in Rome, quench your thirst with the fantastic fountains, known locally as nasoni, which continuously pump fresh, clean water across the city. In our latest installment of the Foodie Sisters video series, Valeria and Benedetta tell you all about this very Roman way to keep hydrated in the Eternal City.

Rome earned its nickname ‘La Regina dell’Acqua’ (the Queen of Water) not only thanks to its position on the banks of the Tiber but for the thousands of fountains which fill the city and create a soundtrack of trickling water. Aside from the grand, ornamental fountains such as the Trevi Fountain and Bernini’s Four Rivers Fountain, the city is also dotted with smaller fountains which have provided drinking water to Romans and visitors for 150 years.

Although the real name of these drinking fountains is fontanelle (little fountains), the Romans usually call them nasoni which means ‘big nose’ in Italian and refers to the curved shape of the spout. Nowadays there are around 2500 in total, with the oldest ones dating back to the 1870s. The water which comes from the nasoni is the same as the water in Roman households and is subject to over 250.000 checks a year by the local water company. Not only do they provide much-needed refreshment as you pound the streets of the city, but they also cut down on the use of plastic bottles and save you money. The constant stream of water releases the pressure in the pipes preventing them from bursting and, in addition, keeps the water from stagnating and forming bacteria.

The original 1874 design of the fountain consisted of a central pillar with two or three water spouts branching off it, although these have largely been replaced there are still a few to be found, for example in Piazza della Rotondo in front of the Pantheon. More commonly seen is the iconic, mass-produced design from the 1920s which are squat, cast iron cylinders which weigh over 100kg each and have a single spout. Occasionally you may also come across more unique styles featuring marble decorations, reused ancient artifacts or with metal water spouts in the shape of a lion, dragon or she-wolf (the symbol of Rome).

Whichever fountain you choose, it is important to follow the rules for drinking. Either bring a bottle to refill or drink directly from the fountain. Be aware that cupping your hands or sticking your head under the tap will immediately mark you out to be a tourist so if you want to blend in, make sure that you use the local technique demonstrated by Benedetta in the video above.

Nasoni form an integral part of Roman daily life and a life-saver during the sweltering summer days so don’t miss the chance to drink from one. And, if there is no nasone in sight, never fear. There is a free app called ‘I Nasoni di Roma’ that you can download to your phone which shows them all on a handy map to ensure that you will never go thirsty in Rome!

For more videos about Roman food and culture check out the rest of the Foodie Sisters in Italy video series and stay tuned for more episodes coming soon! 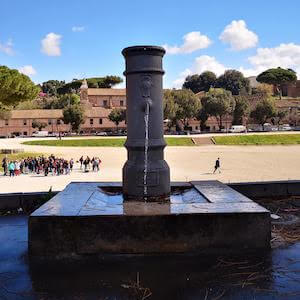