﻿Rome’s Jewish Ghetto treasures a delicious, sweet Jewish pizza. This traditional Roman-Jewish pastry is a far cry from what we would normally consider as pizza. A chunky bar of dough studded with nuts and candied fruits, it can only be found in Rome’s Jewish Ghetto and is just one of the many recipes created during the long history of the Jewish community in Rome. Watch our latest Foodie Sisters video to follow Valeria and Benedetta as they find out more about this historic pastry.

The Jewish community of Rome dates back more than 2000 years making it the oldest in Europe. The city’s Jewish Ghetto, created under orders from the Pope in 1555, remains the heart of the community and is the place to come to sample traditional Roman-Jewish dishes. The dietary restrictions, living conditions and poverty of the Jewish people meant that certain recipes were prepared and evolved specifically in the Ghetto, and still today it celebrates its own unique strain of cucina romana, or Roman cuisine.

Pizza ebraica (literally ‘Jewish pizza’) is one such dish. Found only in the Jewish bakeries it is also known as Pizza de Beridde, a name derived from the celebration of Brit Milah, the ritual circumcision of a new-born baby boy, so it was likely to have initially only prepared for this occasion. Nowadays pizza ebraica is available throughout the year yet it is still prepared the traditional way. The recipe is completely vegan as it does not contain any dairy products and is yeast-free meaning that the dough is unleavened. It is made with flour, almond flour, sugar, almonds, candied fruits, raisins and pine nuts, and cooked until the edges become dark and almost burned. Although you may expect it to be heavy and overly sweet, the nuts balance out the sweetness of the candied fruit and texture of the dough is light, somewhere between a biscuit and a cake.  When in Rome, make sure to take a trip to the Jewish Ghetto to try pizza ebraica, and taste a part of the neighborhood’s legacy. 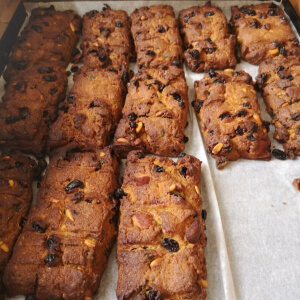