A Guide to Italian Craft Beer

Italian craft beer is simply extraordinary and this is why we have decided to write a guide to let you know all about it. Italy is usually associated with its amazing wine so people may be surprised to find that the Italians have also developed a strong love of craft beer over the last few years. There are now more than 700 microbreweries operating in Italy, thousands of pubs and bars now focus on home-grown brews, and regular beer festivals take place throughout the year. So what exactly is craft beer and why should you try it in Italy?

What is craft beer?

Craft beer (also sometimes referred to as artisanal beer) is beer produced on a much smaller scale than that of large, corporate brands. Made in small breweries, known as microbreweries, craft beer is generally made using less industrialized techniques to make traditional styles of beer (which may be given an innovative twist) and only a small amount will be produced each time. These ‘homemade’ techniques mean that craft beers are unpasteurized and are not micro-filtered like industrial beers so preserve more of the flavors that have developed during the brewing process. The relative freedom that the craft beer brewing process brings also means that the brewer can put more creativity and personality into their product, often utilizing local ingredients and unusual flavors to make a unique brew. Craft beer is also generally stronger than regular industrial beer, with some reaching the same alcohol content as wine.

Why should you try it?

In Italy where beer drinking has, until relatively recently, consisted of an icy Corona at the beach or a cold glass of Peroni in the pizzeria, craft beer has taken off in an unexpected way. Although the Italians are still big wine drinkers (the average annual consumption of wine is about 34 liters per person), the growth of the craft beer industry has inflated the average beer consumption to around 31 liters per person each year. There are now dedicated pubs and bars, many of which double as microbreweries making their own beer on-site, and many restaurants and pizzerias have added craft beers to their drinks menus. As the Italian craft beer movement did not start to emerge until the 1990s and has been unrestricted by a historic beer-making culture, Italy is now considered to be one of the most innovative countries for craft beer production, often recreated long-forgotten beer styles or adding unexpected flavors such as local fruits and nuts to create seasonal beers. There are now thousands of different beers available in Italy, from lighter IPAs and lagers, through the red and amber ales and white wheat beers, to dark stouts and porters, with everything in between. You can find beer made with chestnuts, oysters, pumpkin, honey, and even tea, so the best advice is to taste, taste and taste! 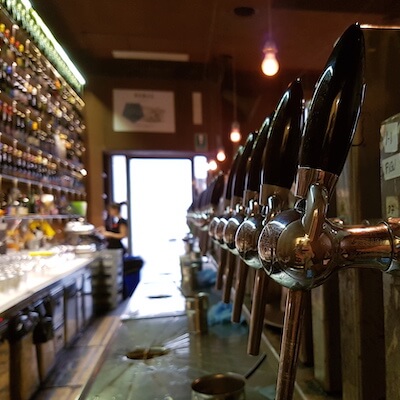