The food of Rome’s Jewish Ghetto forms an integral part of the history of Roman cuisine with many unique and authentic dishes such as a famous sour cherry cake we want to tell you about. Crostata di ricotta e visciole, a sweet pastry tart filled with ricotta cheese and sour cherry jam, is one of the most popular dishes which originated in the neighborhood. Read on to find out more about this mouthwatering recipe and watch as Valeria and Benedetta track the origins and preparation of the dish in the latest Foodie Sisters video.

The Jewish community of Rome has existed for more than 2000 years but it was after the creation of the Jewish Ghetto in 1555 that Roman-Jewish cuisine began to form its own identity. The restrictions and poor living conditions imposed on the Roman Jews, along with religious traditions and celebrations, all contributed to the creation of the community’s own recipes which, over the centuries, have filtered into the broader category of cucina romana. However, there are still recipes that can only be found (or perhaps are more traditionally prepared) in the Jewish Ghetto area of the city.

One such dish is the crostata di ricotta e visciole. The authentic version of this pastry tart is made with a double layer of sweet pastry which encases sweetened ricotta cheese and sour black cherry jam made from a local variety of wild cherry called visciole. The pie is baked until the top is golden and the end result is a perfect balance between crumbly, melt-in-the-mouth, pastry, creamy ricotta and slightly acidic cherry; a harmonious combination of sweet and sour.

Interestingly, while most sweet tarts in Italy are made with only a pastry base and an open or lattice design on top, the traditional preparation of this pie has a full pastry lid covering the filling. This is thought to trace back to a papal decree which forbade they Roman Jews from trading in dairy products. The ever-resourceful Jewish community simply worked around this by concealing the ricotta between layers of pastry and thus the crostata ricotta e visciole was born.

For the very best version of ricotta and cherry pie, follow the Foodie Sisters and head to the Jewish Ghetto where bakeries sell it in small and large portions alongside other Roman-Jewish sweet delights such as ginetti (lemon-flavored cookies) and pizza ebraica (a sweet Jewish ‘pizza’ made with nuts and candied fruit). 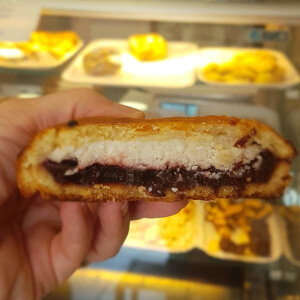