All You Need to Know About Tiramisù

When you are in need of a little lift look no further than a good dose of tiramisù. From the Italian tira-mi-su, this delightful concoction of coffee, mascarpone cream, and cocoa literally translates as pick me up. As one of the most famous Italian desserts, it can now be found in restaurants across the globe and its easy preparation also makes it a popular dish to make at home. But what exactly is tiramisù and where does it come from?

Watch Foodie Sisters in Italy, Benedetta and Valeria, tell you all about tiramisù.

The most common way to make tiramisù is with savoiardi or ladyfinger biscuits which are soaked in strong espresso coffee (sometimes with a splash of liquor such as Marsala wine, amaretto, or rum) and layered on the bottom of a dish before being topped with light cream made from eggs, sugar, and mascarpone. Cocoa powder is then sprinkled on top. However, unlike many traditional Italian recipes, there are no hard and fast rules regarding the preparation of tiramisù and there are countless experimental spins on the classic procedure. It can be layered to create more of a cake structure, made in individual portions, the savoiardi can be substituted with different types of biscuit, cake or cookie, and the coffee element can be replaced with alternative flavorings or even fruit.

Where did tiramisù originate?

Several regions of Italy contest to be the birthplace of tiramisù and there are many conflicting stories. Some say that the dish was created in Siena in the 17th century in honor of Grand Duke Cosimo III, while others maintain that it was served to clients of the brothels in the northern town of Treviso as the restorative powers of the mixture would help to keep business flowing. Despite ongoing debate, the general consensus is that it was invented in the 1960s at a restaurant called Le Beccherie in Treviso in the Veneto region. During the 1980s the popularity of the dish hit its peak and the recipe spread throughout Italy and the world making it a much more modern dish than most would believe.

Where should you eat tiramisù in Rome?

Take a look at the Local Aromas’ list of the best places to eat tiramisù in Rome:

This shop near Campo de’ Fiori is dedicated to tiramisù and offers a range of flavors from classic coffee to versions with pistachio, fruit, and spices.

Flavio’s homemade tiramisù is served in an individual glass and is made with their own chocolate biscuits and a decadent chocolate sauce.

The addition of Nutella gives a chocolately, nutty kick to this delicious version of the traditional recipe.

Rome’s self-styled ‘kingdom of tiramisù’ is the city’s best-known and has multiple locations across town. Take your portion away in its own box to eat on the go.

Learn to make the perfect tiramisù at all of our cooking classes in Rome! 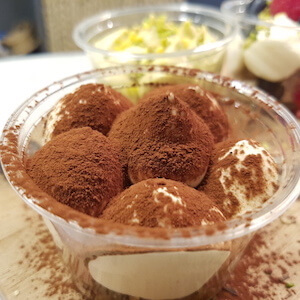