Where to Eat the Best Supplì in Rome

Without a doubt, the Romans’ most beloved fried snack is the supplì. These fried rice balls, that are prepared in Rome only, are on sale across the city in pizzerias and street food shops and are the perfect choice for a hearty, comforting bite on the go at any time of day.  Make sure you don’t leave Rome without tasting (several) samples of the king of Roman street food, His Royal Majesty Supplì. Here is our guide to finding the best supplì in Rome.

Traditionally, supplì are prepared with risotto rice cooked with a tomato ragù, rolled into an oval shape with a piece of mozzarella tucked in the center, then dipped in egg, bread-crumbed, and deep-fried until golden and piping hot. Not to be confused with arancini, which come from Sicily and have a different shape and preparation, the Roman supplì are a law unto themselves that the locals take very seriously.

Good supplì should be made from quality ingredients, with the time taken to build up the flavor of the filling. They should be eaten freshly fried to ensure a crisp, non-greasy coating, and so the mozzarella inside begins to melt. The full name supplì al telefono comes from the string of melted cheese which appears when you bite into it which was said to look like a telephone wire.

Nowadays, many Roman eateries are putting their own spin on the classic supplì recipe to offer a seemingly endless number of variations across the city.

Here are Local Aromas’ top 5 picks for the best supplì in Rome:

Chef Arcangelo Dandini’s street food outpost offers no fewer than seven varieties of supplì to choose from, ranging from the classic to delicious takes on Roman classics such as the Carbonara (with eggs, pecorino cheese, and guanciale) or the Arrabbiata (a spicy mix of tomato and red chili). After opening their first branch just a short hop from Campo de’ Fiori, Supplizio have now inaugurated two more branches in central Rome, one on Via dei Coronari near Piazza Navona and another on Via San Francesco a Ripa in Trastevere.

A Trastevere institution, I Supplì opened its doors in 1979 and continues to provide local trasteverini with good-quality Roman fast-food throughout the day. Also known as La Casa dei Supplì (The House of Supplì), the tiny shop is easy to spot thanks to the almost constant bustle of people coming in and out. Here, the slow-cooked meat sauce is the key to the depth of flavor while a generous addition of good mozzarella guarantees a good telephone wire.

I Supplì, Via San Francesco a Ripa, 137 (Trastevere)

Testaccio Market is fast-gaining a reputation as not only a great place to shop, but also to eat. This is thanks in many ways to the wave of interesting dining options that have popped up at the market since it moved to its current, modern premises in 2012. FoodBox delights in utilizing the excellent produce of the market to offer street food and snacks to hungry shoppers including their wonderful supplì which are freshly-fried to order.

If you need a post-Vatican supplì-fix, make sure you head to this esteemed pizza shop located right by the exit of the Vatican Museums. Gabriele Bonci’s hearty take on the classic supplì is full of flavor. There are often interesting variations, including the supplì spaghettoni, a similar concept but using thick spaghetti to substitute the traditional rice.

Although perhaps more famous for the now ubiquitous trapizzino, a pizza pocket stuffed with traditional recipes, pizza-maker Stefano Callegari’s supplì are also a force to be reckoned with and can be found at the multiple Trapizzino branches throughout town. Alongside the traditional version, there are some interesting twists such as the Genovese with slowly stewed beef and onions and the Tortellino made with prosciutto, mortadella, and meat stock to evoke the flavor of the traditional tortellini in broth. 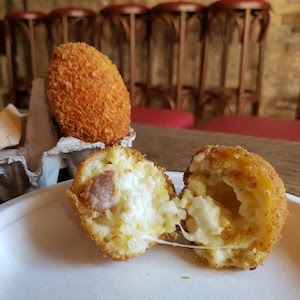