Where to Drink Italian Beer in Rome

5 of the Best Craft Beer Bars in Rome

Although most people associate Italy with wine, the last decade has seen the Italian beer scene develop at breakneck speed as the Italians adopted a love for the production and consumption of artisanal beers. Until relatively recently, beer consumption in Rome was centered around the ubiquitous Irish pubs or a palate-cleansing Peroni with a pizza, with just a handful of craft beer establishments. Nowadays beer-drinking in Rome is a more sophisticated affair with many excellent bars and pubs offering a huge selection of beers from both Italy and beyond.

Watch Foodie Sisters in Italy, Benedetta and Valeria, as they introduce you to Italian craft beer.

Here is the Local Aromas pick of the best places to drink Italian beer in Rome:

‘What did you come here for’ is the literal translation of this craft beer stalwart which is affectionately known by its loyal regulars as Macchè and has been at the forefront of the Roman beer scene since it opened in 2001. Tucked down a picturesque Trastevere back street, it offers an ever-changing list of Italian and International beers poured from their 16 taps.

If you are looking for a refreshing post-Vatican pint, Be.Re boasts an optimum location overlooking nearby Piazza Risorgimento and no fewer than 18 taps and 6 hand pumps. The sprawling interior is light and airy and there is outside seating if you prefer to people-watch. Food accompaniment comes in the form of a collaboration with Trapizzino, pizza dough pockets stuffed with Roman specialties.

Open Baladin opened to great fanfare almost a decade ago and continues to be an unmissable stop for any beer-lover. Offering a staggering choice of over 100 beers, of which around 40 are tap-poured along the spectacular bar, and featuring the Birra Baladin brewery’s own selection, this is truly a temple to artisanal beer. A full menu including burgers, fried snacks, and daily specials completes the experience.

This gorgeous contemporary space in Rome’s Prati district is the recent venture of Lazio brewery Birra del Borgo. Head here for a relaxed beer or stop by at lunch or dinner to sample the tempting menu of pizza, pasta, and meat dishes designed by Rome’s master baker and pizza-maker Gabriele Bonci. If cocktails are more your thing, there is also a selection of beer-based cocktails curated by spirits masters The Jerry Thomas Project.

A little way out of Trastevere’s central hub, Luppolo Station is loved by locals. The 1920s-themed decor is based on an old train station, complete with stacks of luggage and iron rafters, with comfy leather sofas and an informal vibe. The bar offers 20 craft beers on tap, carefully selected to complement the full food menu. There are also regular live music and beer events. 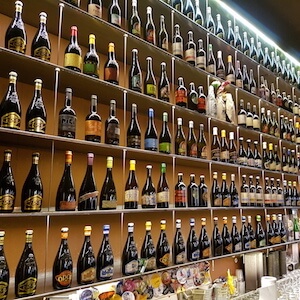