5 Reasons to Visit Rome During August

Ask any Roman and they will tell you to get out of town during August. Long-regarded as the time for annual vacations, until relatively recently the city would completely shut down for the whole month as the locals escaped to the cooler climes of the mountains or head to the beach to recharge. The national holiday on the 15th August (the Feast of the Assumption, commonly known as Ferragosto) is an important occasion and most Italians organize their vacations around that date, but the recognition that there is a need to provide services for tourists and those who stay in the city means that Rome still has plenty to offer visitors during this period.

Here are 5 reasons why Rome in August is actually not a bad idea:

1. July is actually the hottest month

One of the biggest reasons people say to avoid Rome in August is the heat, but average temperatures actually hit their peak in July. Summer in Rome can be oppressively hot, humid, and uncomfortable but August is no worse than its predecessor and, at the end of the day, any excuse for more gelato!

2. Not everything is closed

It is true that many small, family-run shops and restaurants close at this time of the year and the city slows down considerably, but it by no means becomes the ghost town it is often described as. Whereas businesses once would have shut up shop from mid-July to the beginning of September, most closures are now focused on the week or two around the Ferragosto holiday in the middle of the month. Much of the city center along with the main tourist sites and museums are open all month, so you won’t be stuck for things to do. An added bonus is that with so many locals away, public transport is much less crowded.

3. The beach is really close

Rome is very close to the coast. The nearby beaches might not rival the clear waters of Sicily, Calabria, and Sardinia but an hour or two on the train can take you to some charming resort towns such as Santa Marinella, Santa Severa, Sperlonga, or Sabaudia. If all you really want is to feel the sand between your toes and a plate of fresh seafood, the closest beach of Ostia is a quick and easy solution.

August in Rome gets such bad press that in terms of accommodation it is, somewhat surprisingly, considered a low-mid season. While July and September are high-season, there is a drop in prices in between, so there are plenty of bargains to be had if you shop around hotels, B&Bs, apartment rentals, and even airlines.

5. There are amazing events

Rome has really stepped up its August game in terms of entertainment. The summer offers a series of concerts, outdoor cinema, live music and events which take place across the city, and the banks of the river Tiber are lined with bars, market stalls, and restaurants every evening from June to September. For a really authentic Italian summer experience also look out for local festivities known as sagre which take place in the small towns around Rome and are usually centered on gastronomy or folklore.

And if you need another one…

Unlike many food tour companies that take a break over the August holidays, Local Aromas stay open throughout. We know the best places to eat at any time of the year so our food tours and wine tastings keep running regardless. And if you need a place to cool down while you learn a new skill, why not join one of our cooking classes at our rooftop kitchen near the Vatican. 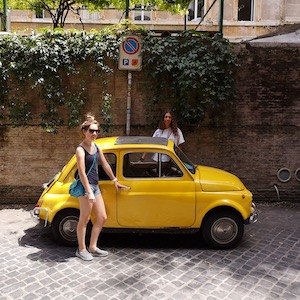