Romans adore pasta and no pasta is more loved than the four iconic Roman pasta dishes that can be found on all good trattoria menus in the city. Despite all four riffing off the same core ingredients, they each have their own personality, story, and meaning. With wonderful guanciale (cured pork jowl) and pecorino romano (aged sheep cheese) taking center stage, each one is a delicious representation of the excellent local produce so readily available in Rome. So when in Rome, make sure that you taste each and every one, safe in the knowledge that you are tasting a little bit of the Eternal City’s history and identity with each bite.

Everybody has heard of carbonara, but what you have eaten outside of Italy is unlikely to bear much resemblance to the real thing. Romans turn their noses up at the international variations of their beloved carbonara which are generally heavier and creamier, often containing mushrooms, ham, garlic or even peas. The authentic Roman carbonara recipe is a simple combination of just four ingredients: a velvety sauce of whisked egg and pecorino cheese studded with crunchy guanciale and given a hefty whack of black pepper – absolutely no cream allowed! Although it may be served with spaghetti, in Rome carbonara is often made with rigatoni which provide the perfect vessel for the chunky sauce, their tube shape ideal for secreting the flavorsome pieces of guanciale.

The name ‘carbonara’ is thought to derive from the Italian word carbone which means coal, but the origins of the dish are hazy. Popular theories include that its name comes from the fact that it was originally cooked over a charcoal fire, or maybe it was served to coal miners, or perhaps it earned the name because the flecks of black pepper resembled coal. Another common theory is that carbonara was born from the rations of powdered egg and bacon brought to Rome by the Allies in WW2. Whatever the history, one thing everyone agrees on is that real Roman carbonara is delicious!

For those who prefer a tomato-based sauce, amatriciana should not be missed. Originally created two centuries ago in the town of Amatrice on the border with Abruzzo region in north-east Lazio, over the years amatriciana earned its place as one of the four traditional pasta dishes served in Rome, where it is often known as its local Romanesco name pasta alla matriciana.

The recipe uses the ubiquitous guanciale cooked with tomatoes, a hint of red chili and a dose of pecorino romano cheese, perfectly balanced to give the salty hit from the guanciale, the sweetness of the tomatoes, a kick from the chili and a creaminess from the grated pecorino which binds the dish together. While the people of Amatrice rigorously insist on serving the sauce with spaghetti, the Roman way to eat it is with bucatini, a type of thick spaghetti with a hole running through it, or occasionally rigatoni.

No recipe demonstrates the beautiful simplicity of Italian food quite like cacio e pepe. A celebration of local pecorino romano cheese (historically known as cacio), it is nothing more than a mixture of grated pecorino and freshly cracked black pepper which is teased into a sauce with the help of starchy pasta water and plenty of stirring. The result is strands of perfectly al dente pasta woven through a silky, creamy, cheese sauce which leaves the back of your throat warm with a peppery punch. Just two ingredients and a little magic create this sumptuously satisfying sauce that can be prepared in the few minutes it takes to boil the pasta.

Although now a popular dish which has also gained international fame, the origins of cacio e pepe come from the shepherds in the Roman countryside who would camp along with their sheep during the spring taking with them their own, non-perishable aged sheep cheese and dried homemade pasta to create a quick, substantial and nourishing meal. The black pepper added a touch of heat to keep them warm on the cold hillside. From these humble, peasant beginnings we now have one of the most treasured dishes of Roman cuisine.

Many visitors to Rome have never heard of pasta alla gricia but it actually formed the fundamental root of the other three. Championing the winning pair of pecorino and guanciale, it is also known as the amatriciana bianca, or white amatriciana, and is considered to be the ancestor of today’s more common pasta all’amatriciana which includes the addition of tomatoes. The use of local ingredients is the core of Italian regional cuisine and the pastures of Lazio have long produced sheep milk cheeses and cured pork products which were cheap, plentiful and long-lasting. Gricia, which will most likely be served with spaghetti or rigatoni, balances these two products faultlessly, with the requisitely Roman crack of black pepper, again using pasta water to combine the ingredients to a luscious creamy sauce laced with the mouthwatering savory flavor of the fatty guanciale. Here is the recipe.

As with amatriciana, the name is a reference to the birthplace of the dish, in this case, the town of Grisciano, located near Amatrice. Originally known as pasta alla griscia, the name eventually became gricia.

Find out more about these incredible recipes on our 4 Roman Pastas Tasting Tour in Rome, where you can taste the individual ingredients and then see the end result by trying all four pasta dishes at an authentic Roman restaurant. 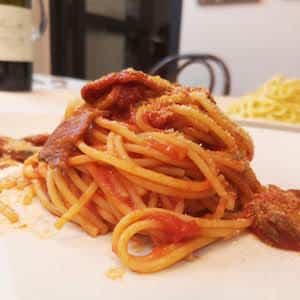