The supplì is the undisputed king of Roman street food. Imagine a ball of rice, dressed with tomato sauce and a heart of mozzarella cheese. Then imagine this same ball tossed in egg, rolled in bread crumbs, and deep-fried until golden.

It sounds good, right? And it is good, therefore you must not leave Rome without having sunk your teeth into one. It is a must, but you also have to be careful as not all supplì in Rome are created equal. There are few places in Rome where you can really indulge in the real deal so check out our list of the best places to eat supplì in Rome. First, watch Foodie Sisters in Italy, Benedetta and Valeria, tell you all about the king of Roman street food.

There are many different variations on the supplì. In the classic version, the rice is usually cooked with a tomato sauce and filled with a piece of mozzarella. However, you may want to try a twist on the classic such as a supplì made with amatriciana sauce (tomato and guanciale bacon), or one made with cacio e pepe (cheese and pepper), or even one of the more experimental versions (and there are some wild ones out there). Of course, it is perfectly acceptable to order more that one if you want to sample some different flavors!

There are also some unwritten rules about how to eat a supplì in Rome, the main one being that cutlery is not permitted, pick up the supplì with your hands to really savor the flavors. This also makes it the perfect street food to eat on the go. The classic version has a heart of mozzarella so when you break it in half that melted mozzarella becomes a string of cheese. This brings to mind a telephone (the old ones) where the main base was connected to the headset with a wire, hence the name supplì al telefono. Romans have a vivid imagination!

Try an amazing supplì along with other typical Roman street foods on our 90-minute Roman Street Food Tour where you can sample fabulous Roman food while wandering the beautiful back streets of the Eternal City. 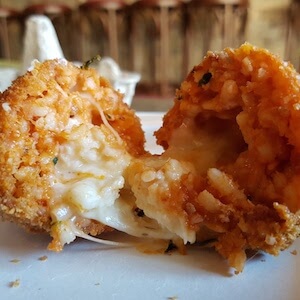