A Guide to Porchetta in Rome

Porchetta: What is it? (And where should you eat it?)

In Rome, there exists a delicious thing and that thing is called porchetta. A large, deboned piece of pork seasoned with salt and herbs before being slow-roasted to create a crispy skin exterior and moist, aromatic meat within. Porchetta is indeed a little piece of heaven for meat-lovers.

Watch Foodie Sisters in Italy, Benedetta and Valeria, and learn how to eat porchetta in Italy.

Porchetta hails from central Italy with each region, town, and producer proposing its own recipe for the mix of seasonings; some add garlic, most use rosemary and fennel along with salt and plenty of pepper. The cooking process is fundamental as roasting the meat too quickly at too high a temperature will cause it to dry out, so low and slow is the way to go, usually for 8 hours or so in a wood-fired oven.

The particulars of porchetta make it difficult to recreate at home and indeed part of the true porchetta experience is also about where you eat it. The area of the Castelli Romani south-east of Rome is renowned for the production of porchetta, in particular, the town of Ariccia where an annual porchetta festival takes place in early September. All over this part of Lazio porchetta is sold in small shops, delis or, kiosks where thick slices will be thrown into a panino of local bread or pizza bianca (don’t ask for sauces or extras, real porchetta can carry off a sandwich by itself, promise). Alternatively, head to a fraschetta, a rustic restaurant of long wooden tables where a feast of locally cured meats and cheeses, pasta dishes, and vegetables will be served along with porchetta on plastic plates and bucketloads of wine at bargain prices.

Finding authentic porchetta in central Rome is more of a challenge, with many places selling a flavorless, dried-out industrial version which bears little resemblance to the real deal. The best option is to hop on a train to the Castelli Romani for a countryside lunch, but if you are strapped for time and still want to try this Roman delicacy check out the list below of our favorite places in Rome to eat some good porchetta.

Here is our Local Aromas list of where to eat amazing porchetta in Rome:

This historic deli sells delicious melt-in-the-mouth porchetta which can be made into a sandwich on request.

Now officially known as Trattoria Pigneto, this fraschetta-style eatery in the eastern neighborhood of Pigneto is the place to go for rustic, lively dining.

A tiny taverna handily positioned near Termini train station which has sold porchetta and a whole load of other delicious things from the Castelli Romani since 1890.

Come and taste delicious porchetta at our Sunday Farmer’s Market tour in Rome! 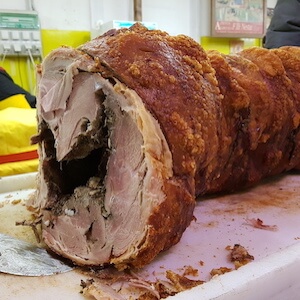 Article Name
A Guide to Porchetta in Rome
Description
Read our useful guide to porchetta in Rome to find out all about this spectacular roast pork dish, typical of the Lazio region. Discover what it is and where to eat it.