6 Seafood Dishes You Need to Try in Rome

While Rome’s traditional cuisine seems to rely heavily on meat and dairy with pork products and sheep cheese being the principal players, the Italian capital lies just 20 miles from the coast meaning that seafood dishes are easy to come by. Tuesday and Friday are the principal days for buying fresh fish, but you can find plenty of fishy options almost every day in the city’s restaurants, or travel a short distance to the nearby coastal resorts for a fish-based meal with a sea view.

These are our favorite authentic fish dishes to eat in Rome:

A major part of the Roman fritti (fried food) family, these fillets of salt-preserved cod, or baccalà, are dipped in a light batter and deep-fried until golden and crispy. Look out for them in Rome’s pizzerias where they are served as an antipasto (appetizer) along with other fried classics such as supplì, olive ascolane, stuffed fried olives, and fiori di zucca, battered zucchini blossoms filled with mozzarella and anchovy. Baccalà can also be found pan-fried and served with vegetables or chickpeas and is traditionally eaten on a Friday in Rome.

Nothing says summer in Italy like an iconic dish of spaghetti with plump clams cooked in garlic and white wine. The simplicity of the ingredients allows the taste of the sea to shine through and leave behind enough garlicky juice for a satisfying scarpetta (mopping up with bread). To be accompanied by a crisp white wine and a good dose of sunshine. For a variation on the vongole veraci clams which are commonly used, some restaurants may also offer the dish made with a tiny, sweet variety of clam called telline.

A type of fish stew or soup, pesce in guazzetto uses a variety of different fish and shellfish served in a liquidy, tomato broth along with plenty of bread to soak up the sauce. A good way to use whatever may be the fresh catch of the day, common ingredients include monkfish, sole, red mullet, clams, mussels, squid, and swordfish.

Named after a type of fishing boat called a paranza, this fried appetizer is a mix of small fish, shrimp, and squid which are lightly floured and then quickly deep-fried to create a crunchy exterior. The fish are cleaned but fried and served (and usually eaten) whole, accompanied by a squeeze of lemon and a glass of something bubbly.

A typical dish of Roman-Jewish cuisine, this recipe consists of layers of fresh anchovies and curly endive drizzled with olive oil and baked in the oven. The recipe, which is a result of a papal order in 1661 which forbade the Jewish community from consuming expensive and luxurious foods restricting them to the cheap, abundant fish such as anchovies and sardines, is still served in the trattorias of Rome’s Jewish Ghetto.

Although this classic Roman soup of skate and romanesco broccoli is not as common in restaurants as it once was, it epitomizes the Roman way of combining cheap, simple ingredients to create something full of flavor. The skate wings are boiled to make a fish broth which is used to cook the other ingredients. In Roman homes, it is often served on Christmas Eve when the consumption of meat is forbidden by the Catholic faith.

For more hints and tips about Rome and Italy’s food scene and traditions, join us for a food tour, wine and beer tasting, and cooking class! We love to share our knowledge and expertise to ensure that your trip to Italy is a delicious one! 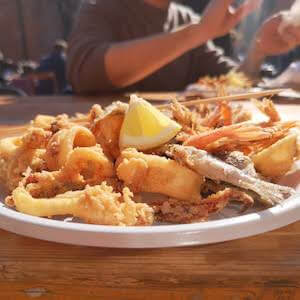