In the April 2020 edition of Borghi Magazine, Local Aromas contributed with a story of the wines in Calabria. We are sharing it with you here!

Modern day Calabria largely coincides with the ancient territory of Enotria, the “Land of Wine”, a geographical area that extended to areas today known as Vulture and Cilento.

The word Enotria not only recalls the word òinos (wine in Greek), but also òinotron (grapevine stakes), which is located in the area of Pollino, between Calabria and Lucania. Here, they still cultivate the grape vines ‘ad alberello con palo secco’, that is, making the sapling plant climb along a stake driven into the ground. This ancient practice has left a legacy behind which is now more increasingly in use, in part thanks to the young winegrowers. They are being inspired by these vineyards and their ancestors’ experience with the land. 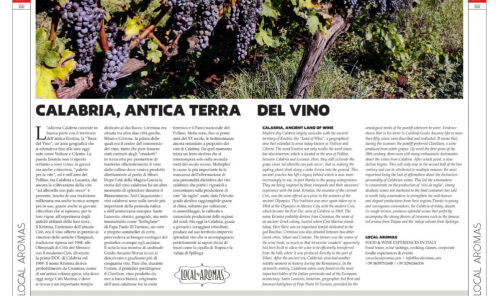 Krimisa, the ancestor of the current Cirò, was the wine offered as a prize to the winners of the ancient Olympics. This tradition was once again taken up in 1968 at the Olympics in Mexico City with the modern Cirò, which became the first DOC wine of Calabria in 1969. The name Krimisa probably derives from Cremissa, the name of an ancient Greek colony, located where Cirò Marina stands today. Here there was an important temple dedicated to the god Bacchus. Cremissa was also situated between two other Greek cities, Sibari and Crotone. The former was the center of the wine trade, so much so that terracotta enodotti (wine pipelines) apparently had been built to allow the wine to be efficiently transferred from the hills where it was produced directly to the port of Sibari.

After the ancient era, Calabrian wine had another notable moment in history during the Renaissance. In the sixteenth century, Calabrian wines were found on the most important tables of the Italian peninsula and of the European aristocracy.

Sante Lancerio, historian, geographer, but first and foremost bottigliere (wine steward) of Pope Paolo III Farnese, provided for the oenological needs of the pontiff wherever he went. Evidence shows that in his letter to Cardinal Guido Ascanio Sforza more than fifty wines were described and evaluated. It seems that, during the summer, the pontiff preferred Clarellum, a wine produced from white grapes, originating in the Calabrian area between the Tyrrhenian coast and the Pollino National Park.

Up until the first years of the 20th century, there were still many enthusiastic testimonies about the wines from Calabria. After which point, a slow decline begins. This will only stop in the second half of the last century and can be attributed to multiple reasons: the most important being the lack of affirmation about the distinctive personality of Calabrian wines. This led the winemakers to concentrate on the production of vini da taglio, strong alcoholic wines not marketed to the final consumer but sold to north Italy winemakers to strengthen the well-known and elegant productions from their regions.

Thanks to young and courageous winemakers, the Calabria of today, despite its rough terrain, produces splendid wines that perfectly accompany the strong flavors of treasures such as the famous red onions from Tropea and the ‘nduja salume from Spilinga. 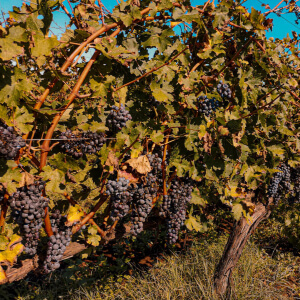 Article Name
Calabria Ancient Land of Wine - Borghi Magazine
Description
There is an incredible story behind the wines of Calabria in Italy. We wrote about it in an article published in Borghi Magazine. Calabria produces splendid wines that perfectly accompany the strong flavors of its local ingredients and dishes.
Author
Local Aromas
Publisher Name
Local Aromas
Publisher Logo