7 Vegetables You Should Eat in Rome in Spring

What you should buy at the market in Rome in springtime

Following the seasons is the best way to guarantee freshness, flavor, and value when shopping for food in Rome.  The beginning of spring in Rome is a wonderful time for fresh vegetables at the city’s produce markets. The tail end of the colder months means that the winter favorites linger on, while the start of the new season brings with it the bright, vibrant taste of longer, sunnier days.

Here is the Local Aromas guide to what to eat in Rome in spring:

Although artichokes are spotted around Rome from October onwards, the season hits its peak in March and April when the local carciofi romaneschi feature on practically every menu in the city. The two classic recipes are the carciofi alla romana (gently braised with garlic, parsley, olive oil and the local roman mint known as mentuccia) and the carciofi alla giudia (deep-fried until the leaves splay out like sunflowers, to be eaten hot with a sprinkling of salt). However, there are endless variations. Try them finely sliced, raw in a salad with parmesan shavings, or tossed with pasta along with chunks of crunchy guanciale (cured pork jowl) and grated pecorino romano.

Puntarelle are the curling, vivid green strips often seen bobbing in buckets of water at Rome’s markets during winter and spring. Actually part of a variety of chicory called cicoria catalogna, puntarelle are the inner stems of the plant which are trimmed into thin tendrils with a sharp knife or special gadget called a taglia puntarelle. They are fresh, crunchy and slightly bitter so, in Rome, they are usually served tossed in a zingy vinaigrette of olive oil, vinegar, garlic, and anchovies but in other regions of Italy may be found cooked or served with pasta.

Also known as barba di frate (in English ‘Monk’s Beard or saltwort) agretti are in season for a short time in early spring and herald the beginning of longer days and warmer weather. Agretti are quickly boiled in salted water and then drizzled with olive oil and lemon juice before serving. Although the texture and appearance are similar to chives, the flavor is more akin to spinach with an iron-rich taste.

Fave or broad beans begin to appear as the temperatures get milder and are a spring-staple for the Romans. They pop up everywhere, in pasta dishes, salads, stews, and soups, but the most traditional time to eat them is on May Day when they are served raw along with hunks of sharp, salty pecorino romano cheese which perfectly pairs with their sweet flavor.

The tiny, early-season, piselli freschi are usually found side-by-side with the broad beans and can be eaten straight from the pod for maximum freshness and sweetness. You can also find them in vignarola, a classic spring stew from the Lazio region which celebrates the new season with artichokes, beans, peas, and lettuce cooked together with guanciale bacon and pecorino romano cheese.

Hailing from the northern town of Treviso, this late-harvest radicchio is distinguished by its slim, deep purple leaves and bright white stems and veins. The bitter, earthy taste works well in risotto (mixed with a creamy cheese such as Taleggio or Gorgonzola) or grilled until the leaves begin to blacken and served brushed with olive oil and dusted with salt.

You cannot ignore the distinctive appearance of the Roman broccoli with its pointed florets and striking green color. With a texture closer to cauliflower, the flavor is nutty and sweet. It is commonly served ripassato, boiled until just soft and then tossed in a hot pan with olive oil, garlic, and red chili. In Rome, it is also found cooked with anchovy and pecorino romano until almost a sauce and served with pasta, or in the traditional fish soup zuppa broccoli e arzilla where it is cooked in a fish broth with skate and broken pieces of spaghetti.

If you love the local food market as much as we do, then join our Sunday Farmer’s Market Tour in Rome or our morning cooking classes in Rome which include a tour to the market. 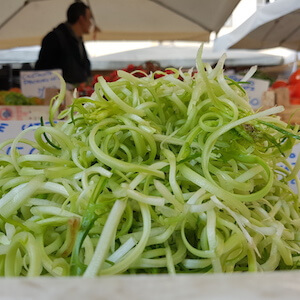