7 Addresses for the Best Artisanal Panettone in Rome

Where to find the best panettone in Rome this Christmas

As the festive season hits the Eternal City, panettone fever takes over. Although originally a Milanese recipe, no Italian home would be without this traditional cake over Christmas time. Characterized by its tall, domed shape, the sweet, bread-like dough for panettone is proved for several days giving it a distinctive light texture and is studded with dried and candied fruits before baking.

While industrial versions of panettone can be found in every supermarket and grocery store, it is the independent bakeries and pastry shops that provide a truly artisanal panettone experience, often putting their own individual spin on the classic recipe.

Here is the Local Aromas selection of the best places in Rome to find panettone and other sweet seasonal treats this Christmas:

This beautiful bakery/restaurant in northern Rome gives customers a glimpse into their creative process thanks to the large window which looks into the kitchen. Priding themselves on combining traditional ingredients and techniques with experimental flair, they offer three types of panettone: the classic, a version with dark chocolate and candied orange, and a recipe made with hemp flour (panettone alla canapa).

Just a short stroll from Campo de’ Fiori, the Roscioli family bakery is a delight for the senses with excellent bread, pastries, and pizza. The focus on quality ingredients extends to their panettone, with no fewer than four varieties available: traditional topped with sugar and almonds, pear and chocolate, a version with sultanas and sweet Moscato wine, and a delicious interpretation using wild strawberry and white chocolate.

Stefania Innocenti’s Trastevere bakery has been open since 1940, with one of the secrets of its success the immense 16 m oven which dominates the shop, and which is used to bake Stefania’s annual panettone production.  This year sees a collaboration with the nearby artisanal gelato shop Fior di Luna: choose from a dried fruit or chocolate panettone to combine with two flavors of gelato.

Take a turn off the main drag down a picturesque alleyway near Piazza Navona to this quaint unassuming pasticceria. Heaven for sugar-lovers everything here, including the panettone, is made with top-notch ingredients, attention to detail and a lot of love.

Rome’s king of pizza, Gabriele Bonci, sells bread and pastry products at his bakery in the Trionfale area of Rome, just north of the Vatican and, at this time of year, extends to the production of seasonal cakes. His light traditional panettone can also be bought by the slice and several other versions are available including a delicious recipe with coffee and chocolate.

Tucked in a tiny piazza between Campo de’ Fiori and Piazza Navona, pastry chef Andrea de Bellis creates some of the city’s most delectable treats. He proposes three types of panettone to choose from, the standard with almonds, raisins and candied fruit, the Milano which uses just raisins, and decadent dark chocolate variety.

This historic business in one of Rome’s most iconic piazzas is renowned throughout town for the quality of its baked goods including the seasonal panettone which follows the traditional style. Don’t forget to peek through the window from outside to see the bakers hard at work. 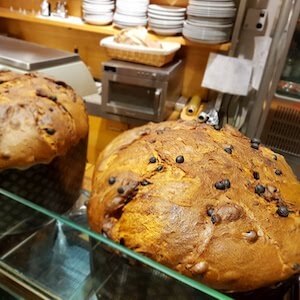